Design is a key factor that orients how our daily life functions and constantly influences us. As designers, we consider elements such as forms, materials, colours, decorations and more, just to make our life more interesting and efficient, and blah-blah-blah. Sometimes, talking minimal is just enough.

I believe one of the biggest yet most common challenges for designer is to select just one best idea among hundreds, and sometimes minimalism can answer the best. For this blog, I’d like to share my recent discoveries of minimal designs/designers that inspire us to re-think about our daily life and needs.

Tom Kemp’s works manifest the beauty and subtlety of a single brushstroke on ceramics. What is remarkable is each work articulates different emotions: excitement, tranquillity, tension, or ease, almost as if he is writing a verse visually and graphically. The angle, thickness, or colour intensity, determined by his natural movement and force, is enough to convey messages while embracing simplicity and minimalism.

I’m personally extremely critical of buildings simply composed of white boxes: they are primary, fundamental, possibly the starting point of most architectural designs (heard of massing?). However, that doesn’t mean it’s the easiest architectural solution and in fact, very challenging to satisfy. OHLAB’s MM House, although directly contrasts architecture and nature in the first sight, allows the appreciation of nature over architecture by putting most emphasis on existing hilly landscape and garden space. Minimalistic design fulfils the building’s function while embracing what’s sometimes more important: nature. 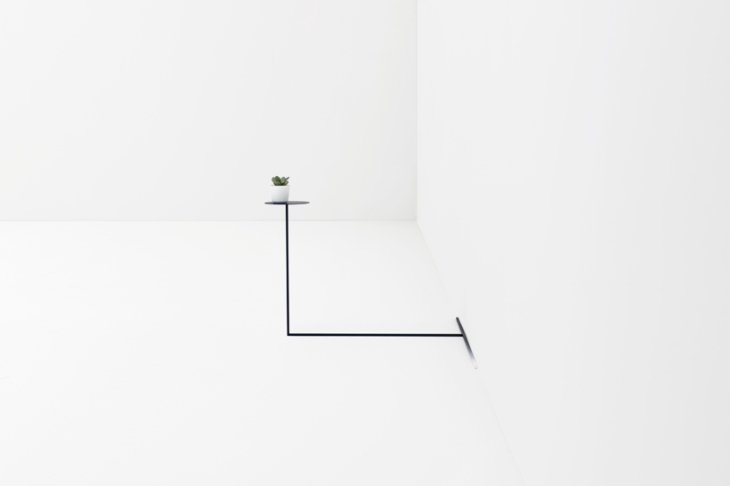 I found out about Nendo when its chief designer Oki Sato visited Toronto for the Interior Design Show in 2013. His Japanese studio approaches design rather simply but intuitively, in an absolutely straightforward but extraordinary way. My favourite work of his studio is the Border Table, where the typical notion of furniture standing on four legs is irrelevant. The elements of architectural space/structure such as corners and edges act as new opportunities to support table tops without intervening with open space.

Simple design and minimal approaches have been my recent interests. This pottery artist has interestingly simple, soothing works that are different from Tom Kemp’s. Leave in the comment section what you think, or share more ideas!