I remember when my family first moved in, my bedroom felt so desolate. Our house before we moved into this one was the place where I truly grew up in, so I had a lot of mixed feelings about leaving it behind. You don’t need to know how many times I cried, but let’s just say it was a lot. All things (and feelings) pass eventually, and I finally got to a point where my room felt like mine again.

The first thing most people notice when they come into my room is my poster collection. I began collecting them when I first started going to anime conventions in 2015. Most of them are from Anime North, which is always one of the highlights of my year. Putting up posters and drawings was the first thing I did to liven up my four barren walls. 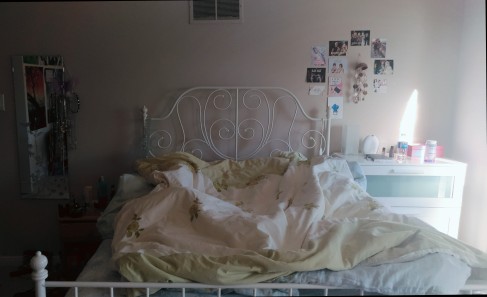 I wouldn’t consider myself a full fledged girly girl, but I do love girly things like my princess bed. For a long time, I had a conflicted relationship with my girly side. Growing up, I was under the impression that being girly was bad. That it’s considered weak to like soft colors and princess-y things. A few of my friends were in the same boat. Eventually, we decided to ignore what society thought and like what we like. Both the bed and the white dresser are from Ikea (read: land of magic and dreams).

Again, I’ve had a conflicted relationship with plushies. There was a time when I felt too childish for having them. But as an adult, I realized that it was silly to focus so much on what others would think. It was around the same time I learned some other important things in life. I learned not to feel embarrassed about what I like. Besides, who doesn’t love cute plushies? They make great cuddle buddies when you don’t want to cuddle another human! 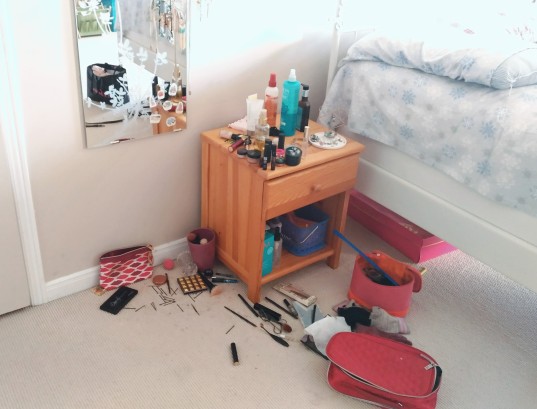 This area on the floor beside my mirror of where I usually do my makeup, if I’m not doing it on the subway. Before I cleaned up, half my room was cluttered with makeup. I’d be looking for a certain lipstick in this corner and end up finding it on the other side of my room. I’m planning to buy a proper makeup mirror so I can start doing it on an actual table. Most of my makeup is from Ipsy, Topbox, or gifts from friends.

How chaotic is your room compared to mine?